Raffensperger held a press conference shortly after noon on Wednesday, November 11 to make two announcements and respond to allegations of voter fraud.

The first announcement was that Raffensperger would be moving the state runoff election scheduled for December 1 to January 5 where it will coincide with the Federal runoff election saving money for taxpayers and time for election officials and workers.

Raffensperger then assured the citizens of Georgia that every complaint of voter fraud was being investigated.

On Thursday morning, Team Trump released information regarding Dade County elections with a post sharing information that a ballot had been submitted by a former Trenton, GA resident who had been deceased since 2015. (See picture of post above) The information was verified at MVP.sos.ga.gov and https://www.google.com/amp/s/www.dignitymemorial.com/obituaries/east-ridge-tn/edward-skwiot-6422398. 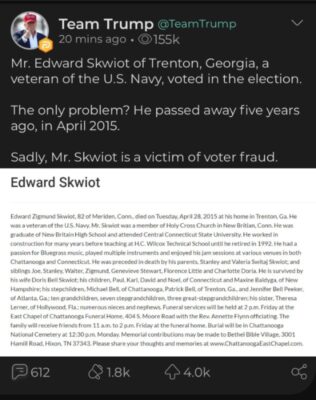 Raffensperger said every legal ballot would be counted. As of the press conference, 97 of Georgia’s 159 counties have sent their final numbers in according to Raffensperger and the margin between President Trump and Vice-president Biden is 14,111.

The next step in the process, Raffensperger said, is to get all final counts in and move to the risk limiting audit, or RLA.

Raffensperger’s office posted the following information about an RLA on the Georgia Secretary of State Facebook site.

“AUDIT: According to law Georgia passed in 2019– Georgia is required have a state-wide hand Risk Limiting Audit (RLA), trigging a recount.

We are committed to counting every legal ballot. Georgia voters deserves accurate, secure results. We stand by our numbers.”

Raffensperger said he would make an official designation at 1 pm of which race would be the RLA and that he would be designating the Presidential election as the RLA.

“With margins being so close it will require a full, by hand recount of ballots in each county,” Raffensperger said. “This will help build confidence. It will be an audit, a recount, and a canvass all in one.”

Raffensperger said county and state elections people would be working hard and with overtime to get the hand count done and election certified by Georgia’s certification date, November 20, 2020.

The meeting of Dade County's local GOP will be... Read More.
Friday, September 24

Unemployment rates continue to stay at record lows throughout... Read More.
Previous Next