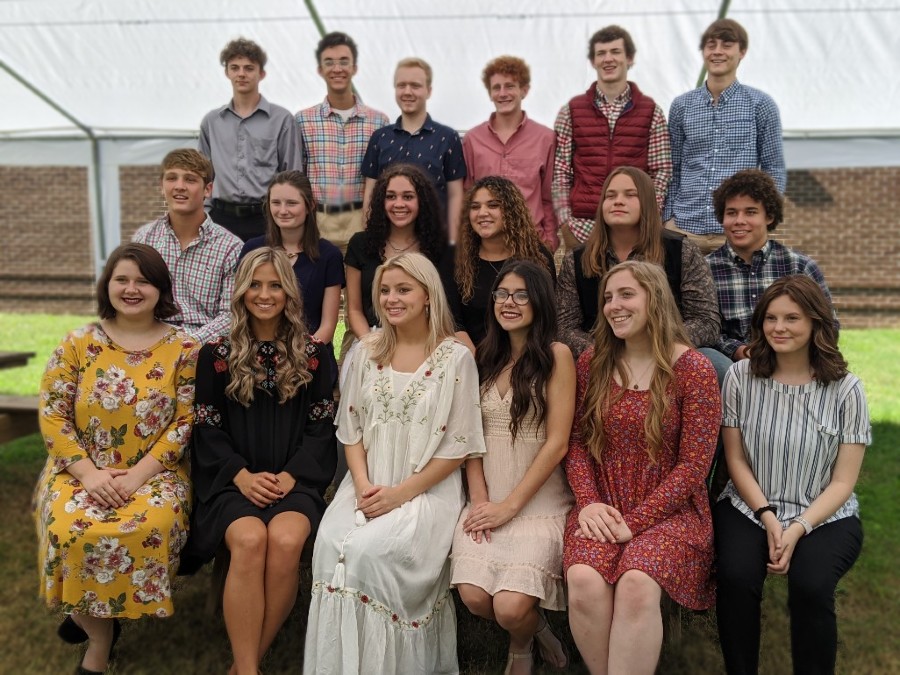 It is homecoming week for Dade County High School and the 2020 Homecoming Court is ready to represent their classes.

Jordan Biddle – daughter of Darren and Karen Biddle of Rising Fawn. Jordan participates in volleyball and concert band, attends Trenton United Methodist Church, and in her free time enjoys hanging out with friends and messing around outside with her pets.

Jordan says she admires her parents the most.

“I admire my parents because they are hardworking and are always there for me and my sister.”

Landon Williams – son of Billy and Alicia William’s of Bryant, AL. Landon plays football, baseball, and is in wrestling. During his free time Landin enjoys fishing and hunting.

Landon says he admires Coach Poston the most.

“Coach Poston because he has done a lot for me in sports and helped me through a lot.”

Caralyne Tory – daughter of Ann Baker of Trenton. Caralyne participates in choir at DCHS and enjoys fishing, underwater snorkeling, and collecting weird inanimate objects in her free time. Caralyne said she is most proud of her ability to make people smile.

“For one, my burps are fantastic and two, my laugh is unforgettable ”

Joshua Tinker – son of Randy and Georgina Tinker of Trenton. Joshua plays soccer and is in FBLA. Joshua likes to hang out with friends in his free time.

“I am most proud about my relationship with Jesus Christ and I know I can count on Him for anything.”

Sidney Johnson – daughter of Christy and Josh Moore of Trenton. Sidney plays soccer and is in chorus, TSA and FBLA as well as working at KOA campground and Cracker Barrel. Sidney says in her free time she likes, in her father’s words, “making those tiktok things and textin"”. Her favorite thing is to go to the bluff to see “God’s beautiful sunsets”.  Sidney admires several people.

“I could not choose just one. The people I admire the most are my Aunt Penny, my sister, Taria Johnson, and Dakota Holder for all being such strong, independent, and loving people.”

(Pictured at bottom from left to right in alphabetical order.)

Madison Allen – daughter of Josh and Mandy Allen. Madison is a cheerleader and participates in Sustainability Club and Art Club. Madison attends Calvary Chapel. Madison’s hobbies include thrift shopping and hanging out with friends. Madison admires her granny the most “because she is my best friend and she understands me the most”.

Sophie Buckner – daughter of Amy and Josh Buckner of Trenton. Sophie participates in Drama and works at Ingles. Sophie enjoys doing puzzles watching movies, and playing animal crossing in her free time.  Sophie says she admires her Dad the most.

“He works so hard to provide for our family. I wouldn’t want anyone else to be my father.”

Bailey Davis – daughter of Mike Davis and Christine Case. Bailey plays volleyball and soccer at DCHS and attends New Salem Baptist Church. In her free time Bailey enjoys playing chess, hiking, and hanging out with friends. Bailey admires her youth pastor, David, the most because “he is one of the most caring and helpful people I know. He is always there for me whenever I need him.”

Savanah Keith – Savanah is involved in FGE, BETA, chorus, and the Thespian Society. Savanah’s hobbies include singing, dancing, and playing music. The person Savanah admires the most is her cousin Haley, “because she has done so much even though she wasn’t dealt the best hand in life”.

Juliana Silverthorne – daughter of Brian and Angela Workman of Rising Fawn. Juliana plays soccer for DCHS and works at the Lookout Mountain Fairyland Club. Juliana is most proud of what she has accomplished.

“I am proud of how hard I’ve worked to be where I am today. I have had many milestones in my life, but always try to keep a smile on my face because at the end of the day God’s got me.”

Jayda Wood – daughter of Jon and Jennifer Wood. Jayda plays basketball and tennis, participates in BETA, and is President of FBLA. Jayda enjoys hanging out with friends and family, shopping, and when not doing any of those says “you’ll find me watching Netflix”. Jayda attends Trenton First Baptist and most admires her Papa “because he has touched people’s hearts all around the world with the Word of God and he inspires me to be a better Christian and person every day”.

(Pictured below from left to right in alphabetical order.)

Gabe Costley – son of Brandon Costley and Amanda Chambliss. Gabe plays basketball at DCHS and works at Elder’s Ace Hardware. Gabe says his hobbies include hanging with friends and going to Sonic at least once a week. Gabe admires his grandfather the most.

“My Grandpa John for his relationship with God and for always doing everything he can for his family and people who need help.”

Chandler Bailey – son of Mark and Laurie Bailey of Lookout Mountain, GA. Chandler plays basketball, runs cross country, plays football, and participates in Track and Field. In his free time Chandler likes to hunt and hang with friends. Chandler most admires his Mom “because she has taught me many great life lessons”.

Makinley Everett – son of Scott and Kelly Everett. Makinley plays football and basketball. Makinley’s hobbies include playing video games and hanging with buddies. Makinley most admires his Dad “because he always pushes me to be better in everything I do”.

Sam Kimball – son of Sean and Paige Kimball of Rising Fawn. Sam participates in concert band, is Drum Major for the marching band, participates in theater and BETA. Sam’s hobbies include playing A-symmetrically board games, studying space, reading classical literature, and hanging out with his friends. Sam most admires his Mother “because her resilience and bravery is beyond admirable”.

“My Mawmaw because she’s amazing!”

Noah Tinker – son of Brad and Sherry Tinker. Noah participates in TSA and is Front End Manager at Food City. In his free time Noah likes filming, camping with his friends, skating, and washing his car 24/7. Noah admires his oldest brother, Travis, the most “because he is currently serving for our country and he will always try his best even when the hardest situations are thrown at him”.

Homecoming looks a little different this year and the traditional homecoming parade has been cancelled, but other activities have been scheduled instead. On Thursday, October 29, a bonfire at dark will be followed by a movie night on the football field for students.

Friday the King ceremony will be held at 2:30 on the football field (weather permitting) with the Queen’s ceremony still taking place during half time of the football game. As of right now, the plan is to have the ladies ride in a car along the track to the 50 yard line and walk out to their spots on the field like normal.

DCHS is having hallway decoration competitions, dress up days, and class competitions in place of parade and float competitions throughout the week of Homecoming during the school days. Judging for all of these competitions will be held on Friday with the Cafeteria staff as judges.

The Dade County Wolverines will face Chattooga on Friday night beginning at 7:30 pm.