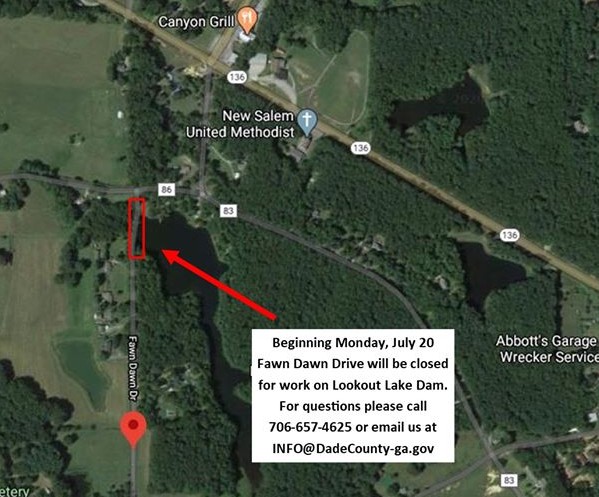 Dade County has announced the closure of Fawn Dawn Drive as work continues on the Lookout Lake Dam Project.

Starting Monday, July 20, Fawn Dawn Drive will be closed to through traffic. The long-planned project will move the dam from a Class 1 with Georgia’s Safe Dams program with the Environmental Protection Division (EPD) to a Class 2 dam. The change will require lowering the lake by three to four feet,  shaving feet off the dam itself and other items to bring the dam into Class 2 compliance for a cost of around $300,000 with the county doing as much of the work as possible.

The lake itself is owned by Larry Moore with the dam owned by the county and located on the county right-of-way. In the early 2000’s, an event caused by Hurricane Ivan caused overtopping with the dam. Until that point, based on the 1970”s Dam Act and a 1970’s letter, the dam was rated a Category 2.

Then in the early 2000’s the state received funding to take another look at dams in the state to see if they were classified correctly. Lookout Lake Dam was re-evaluated and changed to a Category 1, or High Hazardous, dam.  A High Hazardous Dam means that if the dam breeches in an emergency situation then there could be loss of life. For Lookout Lake Dam this means two to three feet of water possible in a home located downstream from the dam.

In 2016, Dade started the process of getting the Lookout Lake Dam into compliance for the second time. The first time, which began when the dam was first classified as a Category 1, plan from an engineering firm made it to the state and there they stopped. The county checked in periodically with the Department of Natural Resources, but time and low priority of the project resulted in no response from the state regarding the plans. Eventually, the engineering firm Dade was working with went out of business and Dade had to look at beginning the process all over.

Dade was offered three options for Lookout Lake Dam by engineers. The most expensive option, with an almost million dollar price tag, would have been to leave the dam as a Category 1. If left at a Category 1 dam then the dam must meet certain standards set by the state and there could be fines assessed to the county. To bring the dam into compliance as a Category 1 dam, the county would have to upgrade all the pipes which are corrugated metal and not recommended for dams and redo the pipe system, upgrade spillways, and there is some erosion that would require an increase in the dam height, putting in buttresses and re-grading the slope. Commissioners decided immediately against option one based on price.

Option Two was to take the dam back to a Category 2 dam. Lowering the water level was only part of the fix, structures and max water level were all taken into account. Rumley asked at the time the options were presented if it would help if there were enough culverts to control water levels and was told in all states except Alabama, they have to assume that all the culverts and spillways are clogged and the lake is able to reach the maximum water level the dam allows.
Bringing the dam back to a Category 2 designation takes the dam off the state’s radar entirely as with the dams currently in place at The Preserve in Rising Fawn. Rumley shared at a recent commission meeting that even though all but one of the dams at The Preserve are leaking, the state says they are all Category 2 dams and there is nothing they can do about them. Option 2 was estimated to cost around $300,000.

Option Three would be the breeching of the dam and draining of Lookout Lake. The county would have had to work with state agencies to find a way to preserve the fish and wildlife with the draining of the lake, plus a breeching plan would have to have been developed with engineers, the dam would need to be notched out with some sort of bridge and there would have to be earthworks and culverts. Option Three was estimated to cost nearly as much as Option Two and would mean the loss of Lookout Lake altogether which is why Commissioner ultimately decided on Option Two and bringing the dam into compliance with a Class 2 dam.

The meeting of Dade County's local GOP will be... Read More.
Friday, September 24