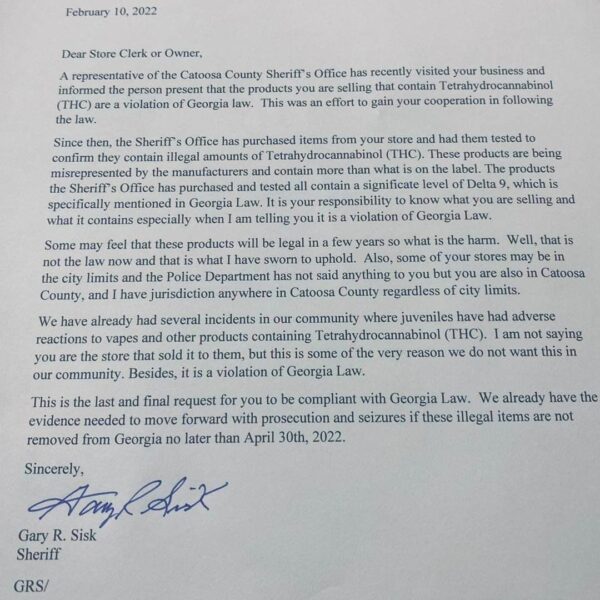 The above letters caused store-owners to pull thousands of dollars worth of products off their shelves in fear of prosecution.

Local store owners Dorinda Moon and Stevie Ellis of “THE SHOP: by Stevie & The Moon” alongside Joe King of “The Shoppe” in Fort Oglethorpe filed for an emergency injunction, stating that the products Mr. Sisk and crew were threatening to “seize” were in fact legal in the state of Georgia.

A court hearing was granted and scheduled on 7/29 where testimony was given on behalf of the plaintiffs, the store owners trying to sell Delta 8, by Senator Jeff Mullis who has a history of pro-medical THC legislation. During his testimony, Senator Mullis admitted to regular use of the product himself for pain relief.

Moon, Ellis, and King sought advice from an attorney from the law office of Pate, Johnson, and Church of Atlanta who had faced a similar situation in Gwinnett County. Also to testify on behalf of the plaintiffs were multiple medical professionals who attested that the “Light Lab 3” tests that Sisk allegedly performed to find illegal Tetrahydrocannabinol were known to give false readings.

On August 2nd, Bryan House ruled in favor of the shop owners to continue selling the products in their stores.

“We just want to help people,” said Moon, who holds a Master’s Degree from the University of Maryland School of Pharmacy in Science and Therapeutics. “I wouldn’t sell anything to my customers that I wouldn’t feel comfortable taking myself or giving to my family.” Moon holds that the cannabinoids in the product because they come from a plant that is within the same family as an illegal product, are the subject of a large misconception. “It is a hemp-derived cannabis,” says Moon, who regularly provides the product to customers in order to manage their pain, cure insomnia, and even help rehabilitate those with addictions to deadly drugs such as the opioid fentanyl, which has killed several Dade Countians in recent years.

Moon offers that if anyone has questions regarding the medical properties of CBD oils and gummies, they are welcome to stop by or call Stevie & The Moon and she would be happy to have a conversation about it with them. “Other than that,” Moon adds, “we just want to be left alone to continue our business.”