Dade School Board discuss the cost of two building projects

A lively discussion between school board members as they
discussed the cost on two building projects Monday at the Dade County
School Board Meeting. Two improvement projects on the agenda; one
regarding a retaining wall at Dade Middle School gymnasium and a new
wing for Davis Elementary School.

To help alleviate damage to the gym floor from rainwater runoff,
Interim School Superintendent Josh Ingle spoke with an architect and a
civil engineer who proposed as 10 ½ foot retaining wall along with
insulation and two new drainage pipes. The estimated cost of the
project is $150,000.

Board member Daniel Case inquired with the slope of the stone behind
the gym if it would be better to put two five foot walls
instead of the the one wall – one behind the other a number of feet
apart. Case said it would be more cost effective because not as much
rock behind the gym would have to be cut out, cutting down on labor
and using the hill to the gym’s advantage. He also asked if they
could get another engineer to look at the plans to see which would be
both cost effective and be a long term fix for the runoff water
problem. Case also added with the one retaining wall it would be very
difficult to replace the HVAC system if and when that time might come.

Chairperson Carolyn Bradford asked Mr. Ingle to ask the architect if
it would be better to build two shorter walls instead of the one.

Next item that sparked a lot of questions and debate was Concept Three
of the Davis Elementary School project. Superintendent Ingle
recommended the board approve the design for the new structure after
consulting with architect Ken Harless. Board member Jennifer Hartline
asked if the price included a concrete corridor cap in the $2.9
million cost. Superintendent Ingle said that was not included in the
$2.9 million plan. To add the corridor cap would add another $100,000
to the project. When asked by Mr. Case if the $3 million price tag
was all inclusive, Superintendent Ingle said that was only the price
of the construction. It did not include design fees or furnishings
for the building. Mr. Case was somewhat concerned of what the cost of
the finished product would be. Mr. Case also had questions about the
size of the building, wanting to make sure all of the building was
going to use and if the project needed to be scaled down if there was
excessive unused space. If they didn’t need to build as big a
building as proposed they may be able to scale it down and save the
taxpayers money on the project. He was assured by other members of
the board that the new wing would be completely utilized.

The treasury report for Dade County schools was promising. Ad valorem
tax collection was up over $614,000 from 2019. ESPLOST 5 collection
from the December records was down a little over $4,500 from the
previous year, however. The school system began the fiscal year with
over $3 million and currently stands at over $5 million. At the
halfway point of the fiscal year expenditures were at 50.25 percent of
the proposed budget. Included in the first half budget were salaries,
which made up a good part of the budget but expenditures should level
off for the second half of the fiscal year.

The board approved a bulk paper contract with Contract Paper Company
for 440 cases of paper at $25.55 a case. The paper contract comes up
for bid every semester.

The board also approved a bulk gasoline purchase from JAT Oil. The
school bosrd purchased 5,000 gallons of unleaded gasoline at $2.09 a
gallon and 500 gallons of diesel at $2.12 a gallon.

In other business both Carolyn Bradford and Johnny Warren were
reelected Chair and Vice-Chair of the School Board for the 2021/22
school year.

Watch the meeting below 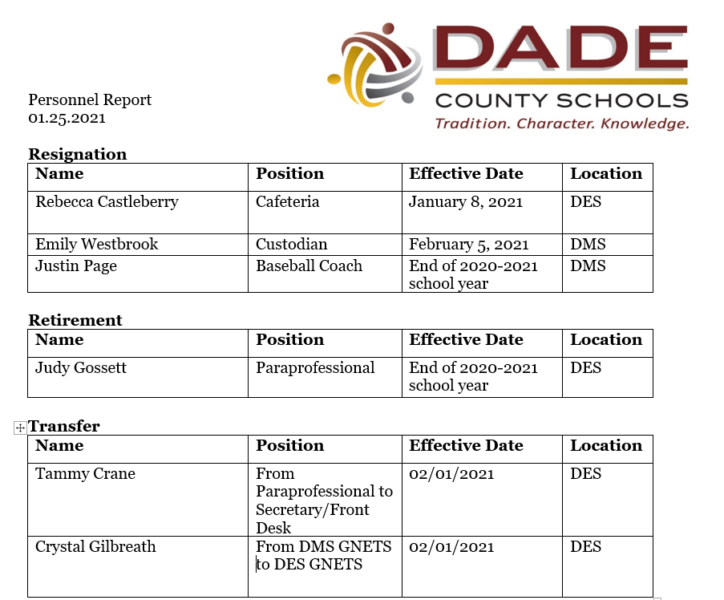