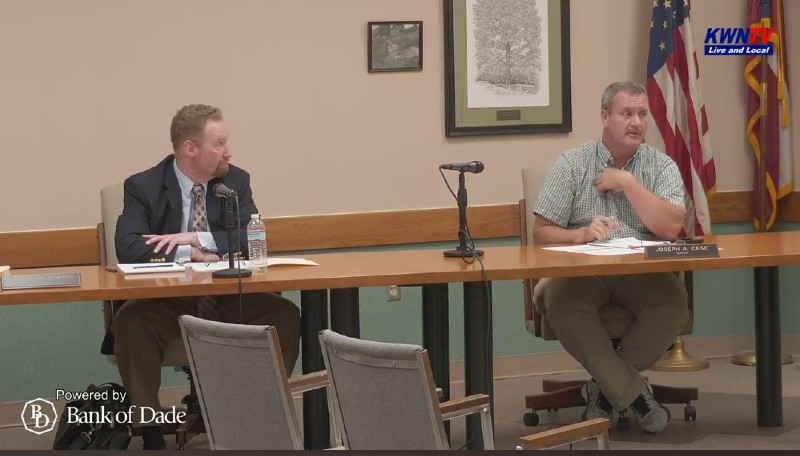 Whether or not the 1945 Dade County Fair will be held this year remains somewhat undetermined after a Special Called Meeting by the Trenton City Council to discuss the event.

When the 1945 Dade County Fair application was first brought to the Council, Mayor Alex Case and Trenton Police Chief Christy Smith discussed the proposed road closures and parking arrangements with Wooten at length with Case indicating that at least one resident had complained about being unable to make it in and out of their driveway. A solution was proposed and approval of the application was tabled for further review by the City Council. At the May city council meeting the fair application remained tabled again as Case discussed liability issues and the need for liability insurance. Streets Commissioner Monda Wooten, asked if there was any way the city could sponsor the event since it was being put on by a group of volunteers and was for the enjoyment of the community – not a fundraiser, but it was preferred that the event not be on city liability insurance.  Nathan Wooten said the committee would look into getting liability insurance or if there was special event insurance the committee could obtain.

With the June city council meeting the permit continued to be up in the air mainly because the Executive Orders regarding the gathering of large groups was still in effect and was not set to end until July 12.  As the 1945 Dade County Fair is a 4th of July event, Wooten said he would be meeting with the fair organizers the next evening and they would decide whether to postpone the fair to a different date and still have the fireworks on the 4th, cancel and still have the fireworks, or cancel the entire event for the year.

A Special Called meeting to discuss the 1945 Dade County Fair permit application was held Monday night because Case said that discussion regarding the fair was going around and around and the only way to discuss the fair as a group was in a special called meeting. Fair organizers had decided to postpone the event until July 18, in hopes the large gathering restrictions would be lifted and not extended, but the fireworks display would stay as a 4th of July event.  Present for the discussion was City Attorney Steven Rodham of Womack and Rodham out of Lafayette, GA. Case introduced the attorney and said that the council had questions regarding the liability issue that had been brought up.

“I would like to see the event go on, but we have to follow what the attorney says about liability,” Police Commissioner Kirk Forshee said.

For almost thirty minutes, the discussion revolved around liability issues as Rodham recommended that, like Lafayette, the city require every vendor at the event to have their own liability policy. Rodham said the way events are usually done is that every vendor has a liability policy with the organizers and city listed on the policy as well.

Those organizing the 1945 Dade County fair asked why it was necessary for vendors to have a liability license if they had a liability policy that covered all the vendors. Nathan Wooten said the event has a liability policy they are getting ready to sign and were told by the insurance agents that this would cover everything. Rodham said he had not spoken with any insurance companies and he would have to look at the policy, but if the insurance guy said it covered all of them, then it should work.

Looking at other policies regarding events in the area, Catoosa County has an event permit policy that only requires liability insurance be held by the group organizing the event with the county added as an endorsement. The same is true with the city of Canton. Ringgold and Rossville do not appear to have an event permit as part of their city codes and a call to their offices was not returned. Some of the cities were unique in that event permitting is done as part of their Standard Operating Procedure (SOP) with guidelines for the permits themselves scattered throughout city or county code like requiring food trucks and food vendors to have certification through the Department of Health as well as liability insurance under their business codes and event permits for road closures and other traffic concerns through the Police Department.

Rodham also spoke about the Governor’s Executive Orders and restrictions on large gatherings and said if the current order is extended then the fair would be in violation of the executive order and that would mean people could be charged with misdemeanors.  Rodham pointed out that event permit application said they expected 500 to 750 people in attendance and currently restrictions for large groups are at 50 or less. Rodham said even if the Governor increased the number of people allowed at gatherings, it would probably still not be to 500 or 750. Rodham said another issue was being able to police social distancing and other guidelines and that the city did not have enough law enforcement personnel to police an event and enforcement of the guidelines would be very difficult.

Case reminded council members that the city pool had 33 restrictions it had to meet before the city could open the pool for operation.

“What would it take for the event to go on?” Commissioner Wooten asked. “How can we make this come about or is it just no.”

“My best answer to that would be not right now,” Rodham said.

Case also reminded commissioners that the number of COVID cases was increasing currently with four to six new cases in Dade every day right now.

Commissioner asked if the group comes forward with liability insurance and if they were not dealing with COVID restrictions, then could the event go forward.  Wooten told Rodham she wanted to get all the questions answered especially since he was at the meeting and despite serving on the council for multiple years she has never met him before. Wooten asked Rodham if the issue of holding the event was basically a COVID thing. Rodham said it was the biggest barrier and then liability insurance.

Event organizer Nathan Wooten asked how Catoosa County is holding their 4th of July event and Case said he had asked Catoosa’s Emergency Management Agency (EMA) director about that and was told the EMA director did not know and had not been a part of the event’s planning. Wooten also asked about events like Touch-A-Truck and Festival of Life. Case responded that Touch-A-Truck was held on county property as was the Festival of Life despite being within city limits. Wooten asked if the county would have the same requirements for events and Case said he could not speak for what the county would be doing.

Touch-A-Truck is an event sponsored by the city through the Trenton Police Department that was first held in Jenkins Park and in 2019 was moved to the county courts facility in Trenton due to an increase in the size of the event. The event has grown to include county and city organizers. Festival of Life is held on the city square in the Veteran’s Park, but began with being held at the New Salem Community Center and has been a county event.

“Honestly I wish this was a city event,” Nathan Wooten said. “That the city and county would take it upon themselves to do something for the community.”

Wooten’s comment was met with silence before Commissioner Wooten asked if the event could be approved by the City Council if the COVID guidelines were lifted and if the organizers had liability insurance. Forshee said he would be okay with the event moving forward if those terms were met. Case said even if the event was sponsored entirely by the city, every vendor would have to carry liability insurance and asked Nathan Wooten if that was what the 1945 Dade County Fair committee was going to do.

“I think we all want it to happen,” Case said. “We just need to make sure we are all on the same sheet of music.”

The city council moved from a work session into the Special Called meeting and unanimously approved the 1945 Dade County Fair event permit application as long as the group obtained liability insurance and the COVID-19 large gatherings guidelines were lifted by the governor before July 18.

The entire city work session and Special Called meeting can be viewed below.