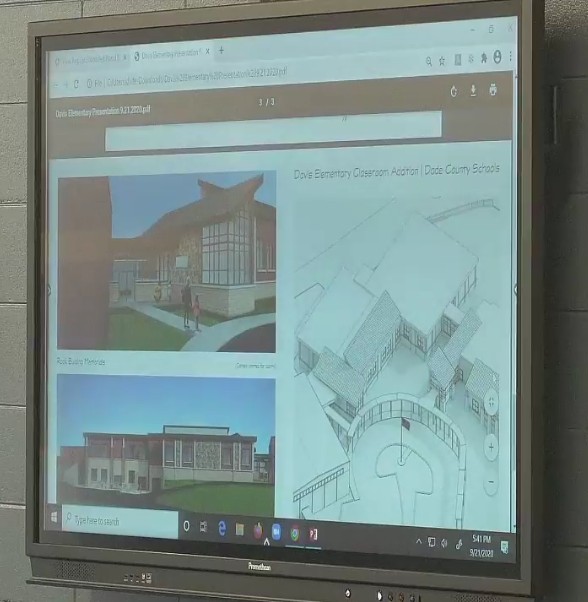 Site plans for the new “Rock Building” at Davis Elementary School were shown to Dade County Board of Education members at their September meeting.

The new building will have two stories to “take advantage” of the basement space from the original building and work with the slope to the land, according to Architect Kenneth Harless who explained the site plans. The building will connect to the gym with a fully enclosed corridor that leads to a vestibule and series of ramps and steps to the main floor of the building. There is also space for an elevator to be added later.

The building will include seven classrooms, a music room, and teacher and student restrooms on the main level. The lower level will be shell space for future growth and a place where students can shelter during storms. The outside has been designed to blend with the previous additions to the school using brick and facing, but incorporating the rock saved from the original building as well as the hand carved plaque and other hand carved stones.

Harless said the site had been bored and in some areas they met refusal, or stone which would have to be removed by means other than a backhoe. The data is being analyzed and a plan will be made. Harless said another well driller certified through the EPD has been found to evaluate the well found when the building was demolished and that information will be given to the board when the driller is done.

Dr. Cleta Long, School Nutrition Director, presented the plan for renovating the Dade Elementary School Library. Long said she came to Dade with experience on projects like the library renovation as well as experience with cafeteria projects. Long said this is her second project like this since coming to Dade County.

Long showed slides showing what the DES library would look like after the proposed renovation. The proposed library renovation would include low shelves for books which are easier for younger kids to reach and can be easily seen over, different types of seating, maker space, STEM area, tables for classes, and other seating areas for reading or collaboration on projects. Long said they wanted the library to be a place where students can learn and love to learn in and would “grow that love of learning”.

“The purpose – the idea – is to create learning spaces for children,” Long said. “Whether that is feeding them and preparing them to learn or creating spaces where they can love to learn.”

The library would also contain touches like a wall incorporating stars and constellations as a nod to the DES logo and theme and incorporate character words on the wall, similar to the Dade Middle School Library that has been newly renovated and has a character wall. Long said if the board likes the plan, then they will put out bids for the project. Harris added that once the DES library was done they would like to move on to the DCHS library next. Board members commented on how much they liked the way the DMS library, where they were currently meeting, had turned out.

Long also gave a report on the school nutrition program and shared that through the USDA, Dade County had received waivers to provide meals at no cost to all Dade County students – virtual and in the schools – through December or until the funds were gone. Long encouraged parents, even if students were learning virtually, to complete the free and reduced lunch forms.

An update on virtual school and testing for the 2020 – 2021 school year was given by Patti Johnson. While testing is back on the table in Georgia, high school students will only have to test in four of the eight categories they normally test – American Literature, Algebra 1, Biology, and U.S. History. The school system has hired four teachers to work an additional hour or two each week to help provide tutoring and other services, for virtual students who need extra help.

They have also “ramped up” the offerings for Gifted Students at the high school level according to Harris. The new guidelines are for universal testing for gifted students instead of teacher or parent request. Johnson said they would start the universal gifted testing with first grade and work up from there.

Dr. Harris shared enrollment numbers for the school system saying they were holding at 78% in school and 22% in virtual, with overall enrollment down 70 students.

School Nurse Sonya Middlebrooks gave board members statistics and numbers on the services and duties nurses are performing. Middlebrooks said with a Nurse at each school they have been able to do more health related things for students like creating Individual Health Care plans for students with medical needs or problems. The Nurses send paperwork to the family and work with family to make sure they know how best to assist the student and respond to medical problems that may arise. The Flu Clinic done annually at the schools will be held in September in conjunction with the Department of Health and will provide flu vaccines to students. Vaccines will also be provided for any staff members wishing to have a flu vaccination starting in October. Also in October will be a vaccination clinic for Hep B, Hep A and Tetanus vaccines for students who need them. Additionally, Middlebrooks has been working with Primary Healthcare on dental services for students and dental care clinics, called Mobile Mondays, will be held at the Elementary Schools first and then Middle and High School.

A Jr. ROTC program has strong support from parents, but may be awhile coming. Harris shared the results from the Jr.ROTC survey sent out to all parents and guardians with children in Dade County schools. Of the surveys completed, Harris said 71% were interested in student participation in a JROTC program and 94% of parents support having the program.

Board Member Retired General Bob Woods explained that currently there are no open spots for a new JROTC program, but Dade will submit their application and be placed on a merit list. When a program drops, then Dade will move up the list or into the open spot.

Woods said he wanted parents to know JROTC was not a military recruitment tool, but it was a character development program.

“I am going to do everything I can to get the students of Dade County in the program,” Woods said.

A facilities report was given by Josh Ingle. Phase I at DMS was replacing HVAC in gym and installing steel supports to support the roof units above the cafeteria. The project was estimated to cost $123,606, but ended at $95,578.24 saving the school system a little over $28,000. Phase II of the DES project included soil testing required of the soil around building 2010 which was at one time solely heated with coal. The testing for coal ash came back below the threshold with no further investigation warranted.

Another project requiring soil testing was the new fuel tanks for the bus barn. Testing was required by the Fire Marshall and the testing came back clear. Ingle said the tanks were set to be delivered later in the week and the installation was projected to be done a month from the prior week depending on rain and materials being delivered on time.

Board members are hoping a topographical survey of DMS property from 2016 can be used by the architect working on the gym flooring project. The gym floor at DMS is separating and the plan is to seal the concrete floor underneath for moisture and lay a whole new floating wood floor. Ingle said he had communicated the Boards’ concern over the water runoff behind the gym and a topographical survey was needed by the architect before they could develop a plan for the water runoff.

Board members approved an update to the system’s Strategic Plan for 2020 – 2025, an application for Exemplary Board designation, a Memorandum of Understanding with GovDeals.com to sell items declared surplus, HVAC replacement of one unit at DES cafeteria at a low bid of $19,146 from Reeves Heating and Air, the purchase of three International buses – two with 42 seats for $186,400 and one with 72 seats for $99,960 – at a total of $286, 360 through the state bid contract list with $77,000 reimbursed by the state and the rest paid out of SPLOST, and Phase I Certificate of Completion for the DMS project.

After an Executive Session to discuss personnel and property, board members returned and approved the following personnel recommendations:

A request for a motion to surplus property to the City of Trenton for Town Creek Trail failed with no motion made.

Videos of the meeting before and after Executive Session can be viewed below.