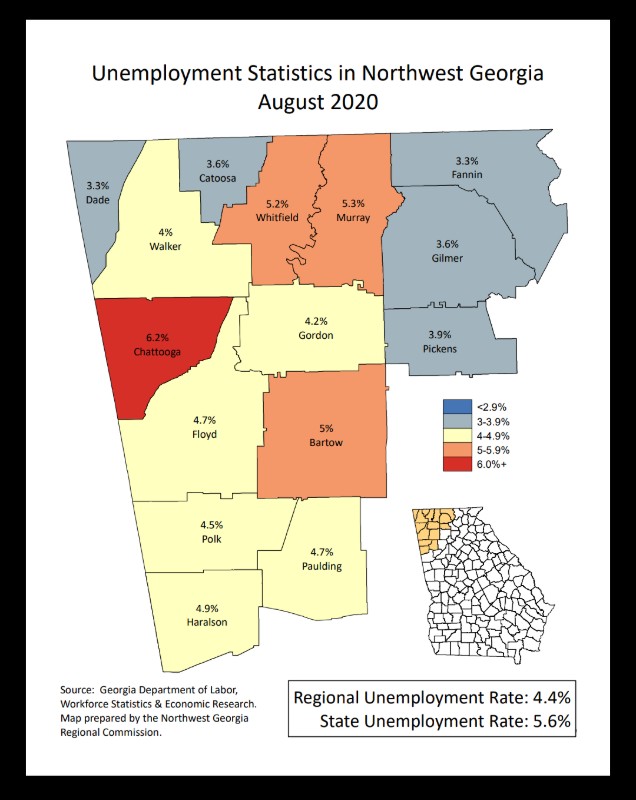 The Northwest Georgia Region is getting closer to fully recovering from the shut down of businesses and shelter in place orders brought on by the COVID-19 Pandemic in March as far as unemployment numbers and Dade continues to have one of the lowest rates in the region.

Four of the fifteen counties in the region are seeing unemployment rates as low as, or lower than, Pre-COVID rates. Murray County’s rate equals February’s rate at 5.3%. Gilmer County’s rate dropped below February’s rate of 3.7% with an August rate of 3.6%, while Dade and Fannin Counties came in lower than their February unemployment rates and tied for the lowest rate in the region at 3.3%. Dade’s Pre-COVID rate in February was 3.4% and Fannin’s 3.6%.

Pictured above is the August unemployment map from the Northwest Georgia Regional Commission (NWGRC).

The Dade County Board of Commissioners met Thursday, February... Read More.
Previous Next

Ready to Read Preschool Story Time at the Library