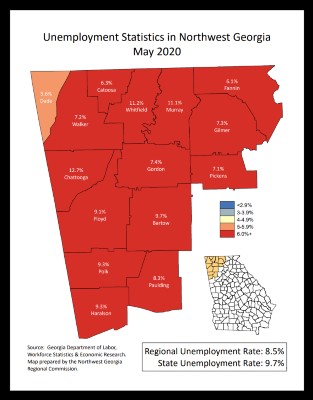 Unemployment rates began a downward track as Georgia re-opened for business in May.

The May unemployment information has been released by the Georgia Department of Labor and the numbers look better than in April, when numbers were almost triple March unemployment rates.

The Northwest Georgia Region saw a slight increase in March with unemployment at 4.4% for the region and 4.2% for the state. In April those numbers jumped to 12.9% of working adults in the region on unemployment and 11.9% for all of Georgia. On June 19, the Georgia Department of Labor announced a preliminary unemployment rate for May of 9.6%.