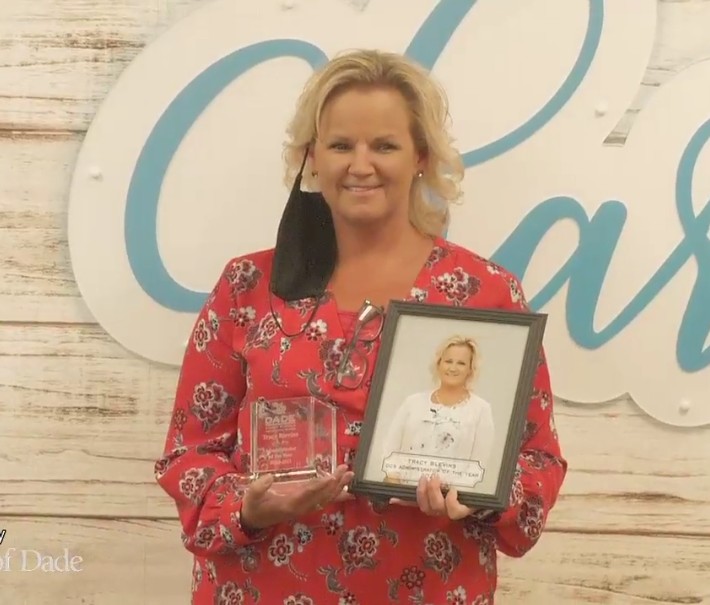 Character Awards, plaques and recognition were given to several members of the Dade County School System this past Monday night.

Chairman of the Board, Carolyn Bradford, led out the meeting by reading a letter from the Dade County Board of Education (BOE) to Superintendent of Dade County Schools Dr. Jan Harris. Harris’ accomplishments while leading Dade County Schools were shared by Bradford and included sharing her experience as a published writer and working with Young Authors for Dade County Schools, climate scores increasing from as low as two to the highest score of five at all schools, and increasing academic achievement across the board.

“For these reasons and more,” Bradford said, “the Dade County Board of Education would like to design and dedicated a plaque in your honor to each school library for your vision and implementation of the Dade County School System Character Education plan.”

Bradford announced the honor while the Board held their meeting in front of the “Wall of Character” which Bradford said would not have happened without Dr. Jan Harris’ leadership.

Not only students are recognized for their good character, but employees of the school system are as well. Annual Character Awards were handed out by Dr. Harris at the BOE meeting. Character Awards were given to Tommy Partlow with the Maintenance Department, Bonnie Harris of Davis Elementary School, Darlene Rogers with Dade Elementary School, Alicia Bell of Dade Middle School, David Howard with DCHS, and Cynthia Daniels at the Central Office. Harris said the character award recipients are chosen by the teachers and staff at each of the facilities.

“The recipients of the Character Award are selected by their peers at each work location.  Staff members are asked to nominate a person of character – a person who possesses the seven qualities of wise leaders identified in our district-wide Character Education Plan: Knowledge, Self-Control, Ethics, Vision, Humility, Counsel, and Understanding.”
Administrator of the Year was announced at the meeting as well. Tracy Blevins, Principal of Dade Elementary School, was awarded Administrator of the year for 2020.  Blevins has been an educator in Dade County for 26 years and became Principal of DES in 2012. Dade Elementary was the first school in the system to be named a Blue Ribbon School of Excellence.Last, but not least, the Board of Education and Dr. Harris recognized Bus Driver Andrea Mazariegos. Mazariegos was driving by the hitting facility around 2 p.m. on a school day when she saw smoke coming from the back of the building. Mazariegos reported the smoke and fire fighters were on the scene quickly Harris said.  An HVAC unit was the cause of the fire. Harris said they were told if the fire had gone on much longer the whole roof would have caught fire. Harris said Mazariegos reporting the smoke saved the building and prevented worse damage  and if there had been any students in there she would have saved them as well.

You can view the entire meeting below.

Pictured Above: Administrator of the Year Tracy Blevins.

The Dade County Special Use Permit Board has ...
Monday, March 1

THE GREAT Egg-Stravaganza a upcoming Community event for KIDS!