With only 2.0% of Dade County collecting unemployment; Dade County is still experiencing a labor shortage. How can both be true? Obviously the perception that people are “being paid to sit at home” isn’t what’s happening. 98% of eligible persons are currently employed, as Northwest Georgia experiences historically low unemployment rate. Statistically, roughly 60% of Dade residents travel elsewhere for work; with the majority of that percentage headed to the Chattanooga area. The JobReady Dade is designed to entice those employees to change their employment to a local business or organization.

Executive Director of Economic Development, William Black reports that daily travel from Dade County to Chattanooga costs an average of over $5000 per year in fuel and vehicle maintenance; not to mention the lost hours in commute and traffic. Black maintains that a change in job location to Dade would add an average equivalent of over $3.31 per hour in wages to your salary. A career change to a simpler commute, would give you more time at home with your family, along with a sizeable raise!

“The Northwest Georgia Joint Development Authority is proud to partner with the Dade County Industrial Development Authority and take part in this event. Workforce readiness and supporting our existing employers is at the top of our minds. This project will help our citizens and businesses alike. This is a fantastic event,” said Senator Jeff Mullis; President of the NGJDA.

The Alliance for Dade, Dade County’s Chamber of Commerce, Chairman George Williams said “The purpose of the event is to help Dade County and employers fill their vacancies and show their available positions within their organizations. It’s good for Dade County because we’re trying to attract more people who live here to work here. The advantage is for Alliance investors and businesses and organizations in Dade to find employees.”

Alongside dozens of Retail, Wholesale, Industrial, and Manufacturing companies who will be presenting their open positions; the event will also include giveaways–and one person attending the event will win $500 in cash.

Information for the event is included in the poster below: 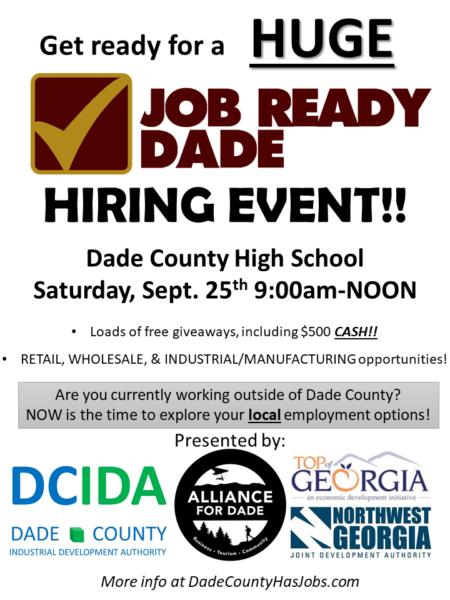