The following was submitted to The Mountain Valley Independent by columnist Elliot Pierce:

It was another week of political debate as we get closer to election day on May 24th. This time on KWN and Discover Dade in Dade County. It was televised, so it had many of the same issues I detailed with the Walker Catoosa debate. So let’s move on to my topic this week. You are being lied to by Colton Moore. A lot.

Below is a clip on Election Integrity from the debate this week. 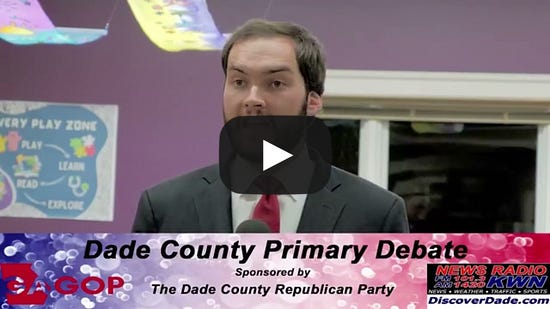 On one point, he is right, voters’ votes are recorded electronically through the QR code printed on ballots. Obviously, no one can read a QR code or barcode. However, it simply isn’t true that the voter choices aren’t printed on the ballots. What he’s complaining about is that the voting machines read the QR codes to count the votes. That’s true. But that is no different than if the ballots were marked by hand and then scanned by a machine.

What the computer does cannot be seen by humans. Whether the scanner reads a QR code, a bar code, or hand-marked paper ballots, it makes no difference. That is why every election has to undergo a risk-limiting audit. That is standard procedure. This involves checking the printed voter selections.

Walker County has a video that explains the audit in more detail. Candidate Moore is smart enough to know what he said is untrue. But it’s part of a pattern with his campaign.

He did it again when discussing mental health during the Dade County debate. In spite of the recently passed Mental Health Bill passing both houses nearly unanimously and being signed into law, he insinuated the same false claims about it as other candidates have done. Among the wild lies is the assertion that it authorizes transgender surgeries.

If Colton Moore can show me where transgender surgery or WHO control is authorized in the bill I’ll make a donation to his campaign and write a column about it.  Additionally, I would ask that he request the ballot images from Dade County since he claimed ballots in Dade did not have voter choices printed on them. Show the proof of both claims.

But, he can’t. Because it’s untrue. And he knows that. Or he is smart enough to know that. A plea of ignorance would be just as bad as lying. He is doing it to stir your passions.

These days, some candidates have adopted that strategy as gospel. After all, it’s much easier than telling the truth. Simply lie and distort to stir the passions of voters. Make people afraid or angry then position oneself as their savior or fighter. That is how Colton wants to get elected.

Personally, I think it is offensive, pathetic, and a colossal waste of talent. It reminds me of a line from President Kennedy’s inaugural address in 1961.

“Those who foolishly sought power by riding the back of the tiger ended up inside.”

This is an age old truth. By lying to voters like he and other candidates have decided is acceptable, they are attempting to ride a tiger composed of voter anger, fear and frustration into office.