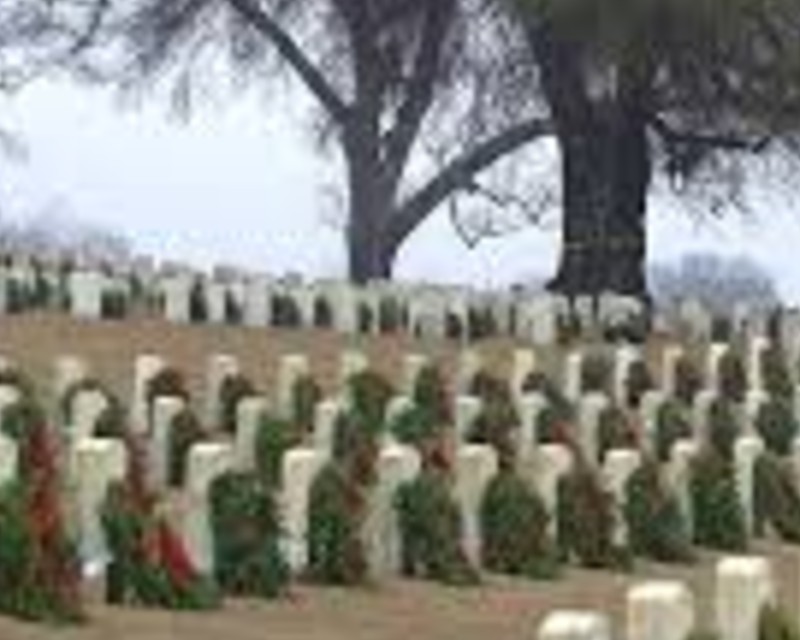 Wreaths Across America Dade County is getting ready for Christmas by celebrating Christmas in July.

Gail Hedden, coordinator for Wreaths Across America Dade County, has announced the Christmas in July event that will help volunteers decorate the graves of Dade County veterans at the National Cemetery in December for the Christmas season. Hedden said due to COVID-19 restrictions the decoration of graves on December 19 is probably going to be held in a different way than previously, without the benefit of thousands of people attending the memorial service and wreath placing a more solitary event, but it is going to happen. In 2019, Hedden said 201 Dade County Veterans were identified and had wreaths placed at their graves. Approximately 25 more veterans have been identified this year. In total, approximately 14,000, of the 49,000 graves at the National Cemetery, received wreaths last year according to Hedden.

“So to that end, I am asking you to celebrate Christmas in July by donating to Wreaths Across America Dade County now,” Hedden said in a press release.

The fundraising goal for Wreaths Across America Dade County is $2500 for 2020. For $15 dollars one grave can be decorated and for $30 three graves can be decorated. Donations in any amount are accepted by the group and will be applied to the cause, Hedden said. They will also take requests for donations to be applied toward specific gravesites. Any extra funds raised by November 1, will be donated to the general Chattanooga fund so that as many deserving veterans can receive wreaths as possible.

Hedden thanked the groups and volunteers that assisted them last year while asking for volunteers to place wreaths on December 19, 2020.

“I will be acting as the Dade County Coordinator again in 2020,” Hedden said. “While I haven’t had meetings with the American Legion Post 106, the American Legion Auxiliary, or the Martha and Mary group of Trenton United Methodist Church, I expect they will once again support this cause in whatever ways they can. While I did not recognize them last year, we had a local Boy Scout Troop from Lookout Mountain who came and placed wreaths for us in 2019. And thanks to all the volunteers who came out December 14, 2019 and placed wreaths on Dade County Veteran’s graves.

I ask for any other groups who can support the cause to do so too, for I believe 2020 is going to be a hard year for Wreaths Across America Dade County. If you have a church or civic group, a book club, a school group, or any other group of friends who want to help out, I encourage you to contact me. We would love to have your help! And, we welcome our North Alabama folks, too.”

The annual Trick or Treat at Dade ...
Friday, October 30

It is homecoming week for Dade County ...
Previous Next