Lookout Mountain resident Carol Dixon approached the podium during the citizen’s participation portion of Thursday night’s meeting of the Dade County Board of Commissioners. Dixon was there to lodge a formal complaint against the property owners of the farm that neighbored hers; Colton Moore and his father, Walter Moore. Dixon told the Commission that she was bringing her concerns to them in order to make the public aware of information demonstrating Colton Moore’s personality and ethics; as Moore is running for Georgia State Senator, representing District 53 (including Dade County) in the upcoming primaries.

Dixon goes on to state that two years ago, Colton and Walter Moore began to use part of her fence to pasture their cattle, with her permission. Some time later, the cows escaped and the Moores approached her with accusations that she had let them out intentionally.

According to Dixon, she advised the Moores that they would need to build their own fence on their property. Colton stated that he would just build her fence back stronger; an offer Dixon declined. According to Dixon, Colton questioned whether the fences were truly hers and threatened to cut them down. Dixon stated she would call the police.

After an incident relating to heavy equipment blocking her driveway entrance, a horn-honk, and a retaliatory intimidation; Dixon stated she formally requested a new survey. Following new property-line drawings, Dixon states a cow burst through her fencing and Moore fixed the damage insufficiently. She paid for a new repair herself.

After the survey, there was 250 feet of Dixon’s fence that crossed onto Moore’s property by ‘about 3 or so inches’. According to Dixon, Moore stated the fence now belonged to him and he would cut it down. Dixon stated she told him she would move it, but he had heavy equipment there that evening that tore the fence down, pulled out the fence posts, and stacked it on her property. The incident left her goats without a pasture.

After being reminded of her five minute time-limit, Dixon summed up by saying that she had called the police several times on the Moore family; with the latest incident relating to multiple young men lining up near her property line and spending hours firing loud weaponry. Dixon supposes this was an intimidation tactic. She states it severely disrupted her farm animals. According to Dixon, she was advised by Dade County Sheriff Officers that the gentlemen had a right to shoot on their property and there was nothing to be done about it.

Dixon provided the Commission with multiple pictures where the Moores have shoved ‘junk’ and heavy equipment against her property line in order to ‘make her life so miserable that she would have to sell and move.’ Dixon stated that her intent was to bring these actions to the commission and say that Dade County must have laws and guidelines regarding actions that people perform on their property that affects their neighbors. She also states she is worried that Colton Moore would not represent the county well if he were to be elected to a seat on the Georgia State Senate.

District 4 Commissioner Melissa Bradford, as the representative for the Lookout Mountain stated, “I do wish there was something to be done, but as it stands… it’s going to be left up to your decisions and the Sheriff’s Department as to what’s to be done.” Bradford was sympathetic, “I do feel for you…” but stated that as it stands, there isn’t anything the sitting Commission can do without zoning laws in place for these matters.

Below is the video of Dixon’s claims: 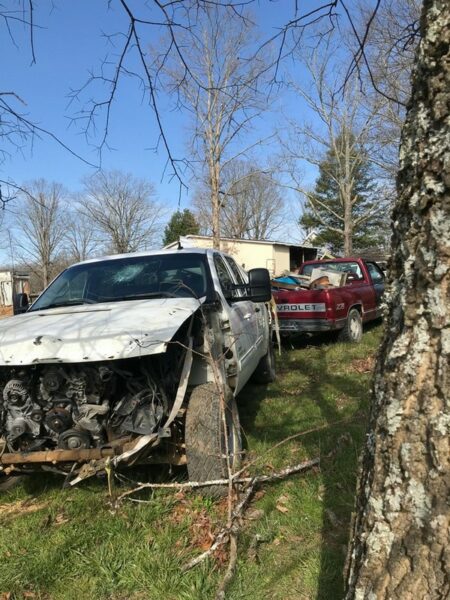 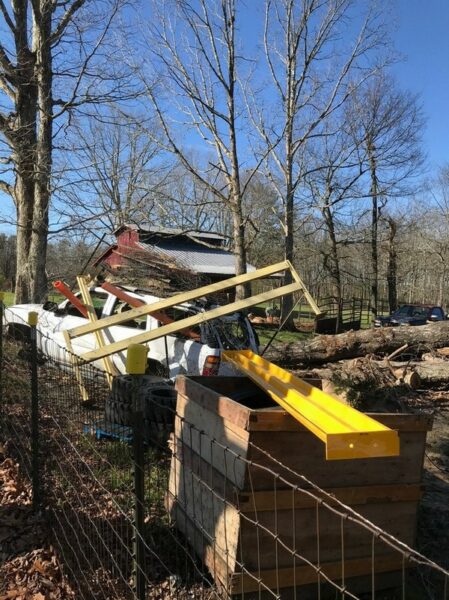 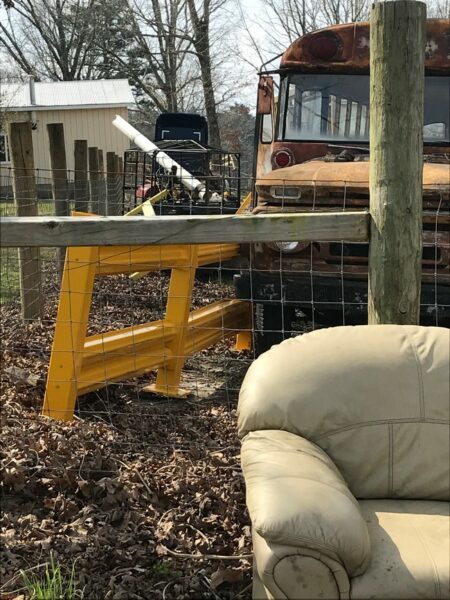 Dixon shows the Commission these photos, taken from her property line

The Mountain Valley Independent reached out to Colton Moore the following day.

Following this, there was a tree that began on Moore’s property, but with a limb overhanging onto Dixon’s. “I told her I had no problem cutting the tree limb for her, but I wasn’t going to be able to get to that tree limb any time soon. A couple weeks pass by and she asked again, ‘When was I going to come by and get that tree limb? (sic)” Moore states he advised Dixon of several services he has used that could cut the tree limb for her. Moore followed that, while he was out of town working an auction, he received a call from Dixon regarding the limb; an hour after which Moore received multiple calls from neighbors stating that all of his cattle had been let out of their pasture, into the community. The fence connecting his and her fence had been destroyed, alleges Moore.

Moore states the ‘horn-honking’ incident was actually Dixon ‘repeatedly laying on the horn’, to which he told her ‘that may be the way they do it in New York, but that’s not the way we do it here in Dade County. Moore states he then proceeded to his junkyard, and picked up a junk care and stuck it on the property line and told Dixon, “if you want to be a crazy neighbor, then I can be a crazy neighbor.”

According to Moore, there was a fence that all three parties (himself, his father, and Dixon) understood was half on each party’s property. Moore states this fence was built in the 1970s, but was refurbished by Dixon 18 years ago. Moore states he believes Dixon then assumed she had ownership of the fence. Moore states he dropped the issue, but Dixon continued to harass him that his cows were always touching her fence. Moore states that Dixon asked him to remove a gate that touched the fence and that he “had to do something about it today.” Moore said he told Dixon, “Well Carol, if you want to do it that way, I’ll take care of my (side of the) fence.” He then advised Dixon to ‘go put your goats up.’ “I proceeded to move my cattle out of the field, and she proceeded to move her goats out of the field.” Moore proceeded to remove his section of fence.

Moore alleges that Dixon has retaliated the events by constantly calling government agencies on Moore; such as calling the EPA and reporting that there are multiple families living in his trailer, ‘dumping raw sewage on the ground.’ Moore alleges his trailer has been properly placed on his property for over three years with a working septic system and that Dixon is harassing him. Moore states he followed the harassment by piling more junk on his side of the property line.

Moore states Dixon continues to harass him with false claims to government agencies, government force, and by placing multiple cameras along the property line facing his property.

Moore states that the men shooting guns on his property has no relation to the property line dispute; and that while Dixon has over a year and a half of conversations between them on tape, that tape was shown to a Dade County Sheriff’s Department Officer who denied that there was any threats to Dixon, except ‘that I would continue to pile junk on my property.’

When reached for comment, the Dade County Sheriff’s Office confirmed that they were not aware of any direct threats from Moore to Dixon, other than turning the property into a junkyard. The Sheriff’s Office also confirmed that an officer reported to the scene regarding the shooting incident and was asked by Dixon to ask the men to move. The officer asked the men to move. The men asked if they were required to, but legally there was nothing for the officer to enforce. It is the Sheriff’s Office’s understanding that the men did not move.

“I’m disappointed in the Commissioners. The Commissioner’s job is not to console a constituent. Their job is to make ordinances, not to be counselors.”