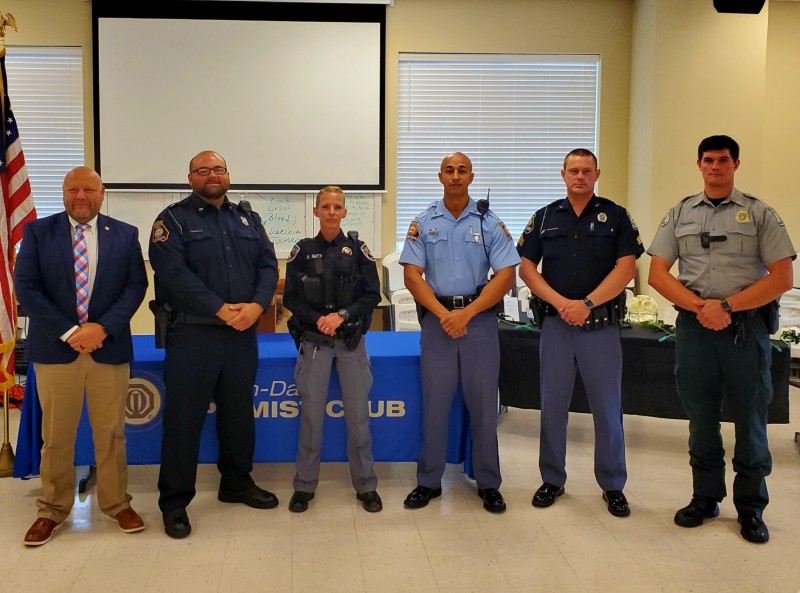 The Trenton Dade Optimist club hosted the 16th Annual Law Enforcement Appreciation Ceremony this past week as part of Respect for Law Week.
The Optimist Club was joined by the Georgia Fraternal Order of Police in recognizing Officers of the Year nominated by different Law Enforcement Agencies operating in Dade County. The officers were recognized for their “dedication and outstanding performances throughout the year”, according to a post by the Dade County Sheriff’s Department.
Nominees were (Pictured Above: Left to Right – Special Agent Daniel Nicholson with the Georgia Bureau of Investigation,  K-9 Officer Dylon Floyd from the Trenton Police Department, Sgt. Hailey Smith for the Dade County Sheriff’s Office, Trooper Garrett King from Georgia State Patrol, Sgt. Brent Stephens with the Motor Carriers Compliance Division, and Game Warden Kyle Faulkner of the DNR Law Enforcement Division.
“To all nominees, and to every officer who continues to put on the uniform each day; we salute you for your selfless service” – Sheriff Ray Cross said.
Video of the ceremony can be viewed below.