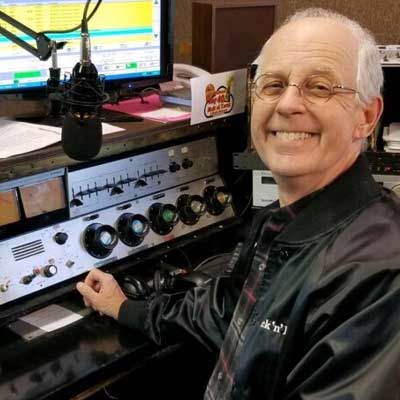 About Oldies Coast to Coast

In the 1950s, my interest in Rock ‘n’ Roll began when my sister and her friends danced in our basement to their favorite records.

After playing radio disc jockey in my basement with my friend Von, I moved up to the “BIG” time as a volunteer “newsreader” in Muncie, Indiana at WBST-FM while attending Ball State University (“Go Cardinals!”). To this day I can still remember the face of the engineer on the other side of the studio glass window as I pronounced “Tucson”, Arizona as “Tuck-sun.” Oops!

My first professional radio job was in Muncie, Indiana. I started as weekend newsman at the Top-40 station, WERK-AM were I was “One of the men at WERK”! Instead of reporting the news, I really wanted to “spin” the Top 40 Hits. Up the road, in New Castle, Indiana was my first chance to do that at WCTW-AM.

Since the late 1960’s, I have been a D.J. at many Top 40 radio stations from small to large markets including…

WCVS-AM Springfield, Illinois (When I accepted the job over the phone, I could have sworn the guy said he was calling from W “CBS”.)
KELI-AM Tulsa, Oklahoma
WCOF-FM (“Coast 107.3”) Tampa Bay, Florida (Worked with the Legendary Scott Robbins)
WSUN-FM (“Oldies 97.1”) Tampa Bay, Florida (Back with Scott again!)
WRQQ-FM (“Oldies 97.1) Nashville, Tennessee (Broadcasting from historic Music Row)
Tiring of working for “the man”, I purchased my own broadcast facility WWON-AM in Waynesboro, Tennessee. On the first day of ownership, I flipped the format from Country to “BIG Oldies 930” featuring Scott Shannon’s True Oldies Channel.

In addition to being a live, on-the-air D.J. I’ve spent the last 25 years syndicating my own program “Oldies Coast-to-Coast™ specializing in ’50s & 60s Rock ‘n’ Roll, which was broadcast on many radio stations throughout the U.S.A. Recently, I was selected by the National Top 40 Hall of Fame and Radio Museum in Chattanooga, Tennessee to broadcast my newest syndicated program playing ‘60s & ‘70s Rock ‘n’ Roll from the historic BIG JET-FLI studios (WFLI-FM-AM).

Will you do me a “BIG” favor? If you know of a Oldies radio station that is not broadcasting Oldies Coast-to-Coast™, tell them to contact me

Great Rock ‘n’ Roll…just like it used to be!

Firefighters and trainers from Dade and the northwest Georgia ...
Sunday, September 20

Dade County Law Enforcement Officers of the Year for 2020 Announced

The Trenton ...
Previous Next