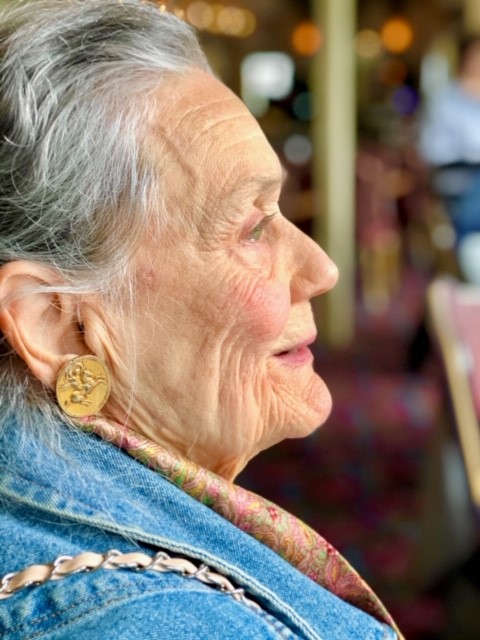 Marjorie McGown Sharpley, born in San Antonio Texas in 1932, passed away October 6, 2020 at the age of 88, at home, with her family by her side. She was preceded in death by her husband Joseph Harold (Hal) Sharpley in 1990, her parents Floyd Senior and Eunice Harrell McGown, sister Julia Roques and brother Floyd McGown. Marjorie is survived by her two children, Gammon McGown Sharpley and Caroline Eans Sharpley Quinn and son-in-law Matthew Quinn. She is also survived by her grandson Campbell McGown Stuart.

During the first three years of her life Marjorie followed her parents to a ranch near Pearsall Texas, then on to Mexico where Floyd practiced law representing American clients there. Marjorie even learned to speak Spanish before English. Returning briefly to San Antonio where her father served as City Manager under Mayor Maury Maverick, she followed them to Washington where Floyd was asked to participate in the war effort in FDR’s Labor Department. Marjorie attended the National Cathedral school during this time. Her father was later appointed to head the War Labor Board for the Southwest region whose offices were located in Dallas.

In Dallas they lived in the Stoneleigh Hotel and Marjorie attended Stephen J. Hay Elementary and Hockaday schools. At war’s end the family returned to San Antonio and Floyd opened a law practice there. Marjorie divided her time between San Antonio and the family’s ranch in the hill country near Boerne, attending first Boerne High School and then graduating from Thomas Jefferson High School in San Antonio. She was presented by the German Club in 1953.

Marjorie went on to study first at Trinity University, then transferred to the University of Texas at Austin where she was inducted into the Pi Beta Phi sorority, making several life-long friends there. After obtaining her BA with a double major in History and Political Science, she returned to San Antonio where she taught elementary school in the San Antonio Public schools.

Marjorie continued her studies, attending first Saint Mary’s Law School, then transferring to UT Law School, where she met her future husband, Korean War veteran Hal Sharpley. They were married at the First Presbyterian Church of San Antonio in 1958. Though lacking only a few hours to obtain her law degree, Marjorie set aside her goal of becoming a lawyer to raise her children and focus on being a full-time homemaker. Deeply patriotic and in keeping with their interest in law and politics, Marjorie and Hal were politically active in each of the two major parties at one time or another.

Over the years Hal’s career took him from San Antonio, to El Paso, back to San Antonio, then San Marcos, Austin and finally Dallas with Marjorie faithfully accompanying him all along life’s path, surviving him by another 30 years. Their last activity was running a showroom together at the Dallas Trade Mart as Hal was the regional representative for Royal Worcester-Spode and Hammersley China, Barker Ellis Silver, Stuart Crystal, Jean Couzon and Pordelaine d’Auteuil tableware.

In San Antonio, Austin and Dallas Marjorie participated in volunteer work with the Junior League. In Dallas, Marjorie also did volunteer work for Junior Opera Action, by organizing events with other opera-loving mothers who were seeking to develop an appreciation for opera among Dallas youth.
A devoted wife, mother and grandmother, Marjorie was also a gourmet cook and consummate entertainer. She and Hal, took great pleasure in making a beautiful home for their family and loved entertaining friends and family there. Marjorie’s irreplaceable smile, stunning blue eyes, wonderful sense of humor, creative sense of style, loyalty in friendship and love for her family will be sorely missed.