Sen. Kelly Loeffler and her Democrat challenger Raphael Warnock faced off in a tense nationally televised debate Sunday night just under one month before the Georgia U.S. Senate runoff election on Jan. 5.

The debate, hosted by the Atlanta Press Club (APC) is likely the only time that the two candidates will be on the same stage before the election. It is potentially the last time voters will be able to compare the two candidates outside of a scripted campaign rally, social media posts or campaign ads.

Loeffler, R-Ga., and Warnock were at each others’ throats the entire night but the moderator, FOX 5 Atlanta anchor Russ Spencer, managed to keep things orderly and on schedule, moving between three rounds of questions and closing statements.

There is another U.S. Senate runoff race in Georgia between Sen. David Perdue, R-Ga., and his Democrat challenger Jon Ossoff. Perdue refused to debate Ossoff after participating in two forums before the Nov. 3 general election. Ossoff, before the Loeffler-Warnock debate, appeared at a 30-minute forum also hosted by the APC where he was questioned by reporters with an empty podium representing Perdue nearby. 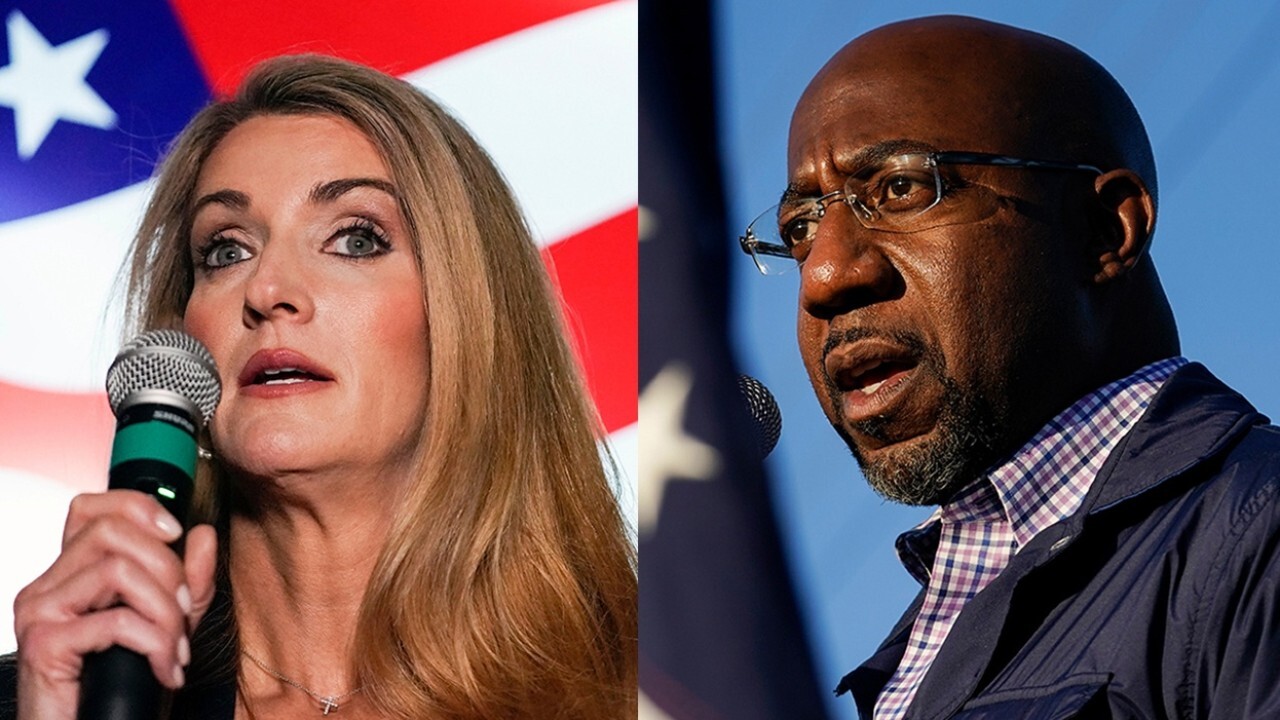 The results of those two elections will determine which party controls the U.S. Senate for the next two years. Democrats must sweep the Georgia races while Republicans only need to win one to secure a majority.

Here are the most important moments from the Sunday night debate between Loeffler and Warnock.

Republicans in Georgia have been caught up in the whirlwind of unsubstantiated election fraud claims by the president and his allies, refusing to cross the president but also trying to ensure Trump voters will show up on Jan. 5 to vote for the GOP Senate candidates. The issue took up by far the most time in the Sunday debate.

Attorneys Lin Wood and Sidney Powell earlier this month ratcheted up Republican fears that Trump’s rhetoric could dampen turnout in Georgia by explicitly urging Georgians to sit out of the Senate runoffs. Loeffler on Sunday walked the fine line in her answers about alleged fraud while also encouraging Republicans to turn out to vote.

“It’s vitally important that Georgians trust our election process and the president has every right to every legal recourse, and that’s what’s taking place,” Loeffler said in response to a question about whether or not she agrees with Trump’s false claim that he won Georgia. “I’ve called for investigations and now there’s 250 investigations open here in Georgia. But the president was also clear that Georgians need to come out and vote for David Perdue and myself because of what’s at stake in this election.”

Loeffler did not answer a follow-up question about whether the election was rigged, but attacked Warnock over allegations of voter fraud.

“It’s very clear that there were issues in this election. There are 250 investigations open. Including an investigation into one of my opponent’s organizations for voter fraud,” Loeffler said. “We have to make sure that Georgians trust this process.”

Recounts in Georgia have turned up some ballots that were not counted in initially and most experts agree that there is at least some fraud in most elections. But that fraud is extraordinarily rare, happening in such small numbers that it would almost never overturn a statewide result.

President-elect Biden won several key states by margins of tens of thousands of votes, many more than could reasonably be fraudulently cast. Further, legal challenges by the Trump campaign and its allies have almost all failed and do not realistically threaten to overturn the result in any state.

The moderators and the candidates returned to the issue of alleged voter fraud multiple times throughout the hour-long debate. Spencer asked Warnock to compare former Georgia gubernatorial candidate Stacey Abrams’ refusal to concede her election to Trump’s refusal to concede the presidential election.

“Stacey Abrams did not refuse to acknowledge the fact that her opponent was the governor,” Warnock said. “Here we are several weeks after the election and Kelly Loeffler continues to cast doubt on an American, democratic election.”

Loeffler shot back: “Radical liberal Raphael Warnock has partnered with Stacey Abrams in these voter suppression conspiracies… President Trump has every right to every legal recourse. But we also have to make sure that Georgians know that we have a process that works, that their vote is counted and that no illegal votes are counted. And that’s what I’m going to continue to fight for.”

In this Nov. 4, 2018, file photo, then-Georgia Republican gubernatorial candidate Brian Kemp, left, walks with President Donald Trump as Trump arrives for a rally in Macon , Ga. President Trump said Sunday, Nov. 29, 2020 he was “ashamed” for endorsing the Republican governor of Georgia after he lost in the state to Democrat Joe Biden. Trump said on Fox News that Gov. Brian Kemp has “done absolutely nothing” to question the state’s results.. (AP Photo/John Bazemore, File)

Then even later in the debate, Loeffler was asked essentially to take sides between Trump and Gov. Brian Kemp. Trump has enthusiastically endorsed the senator and Kemp, who appointed her, has been on the receiving end of Trump’s Twitter wrath because he has not ceded to Trump’s demand to help overturn the Georgia electoral result.

“The president has the right to pursue every legal recourse to make sure that this was a free and fair election in Georgia,” Loeffler said in response to a question about whether Trump’s attacks on Kemp are wrong.

Loeffler, when asked directly to take a side between Trump and Kemp, refused to, saying, “my loyalties are with Georgia.”

2. Warnock sidesteps question on police, Loeffler hits him on bevy of past comments

Warnock has made many controversial comments during his time as a pastor which Loeffler has featured in attack ads and social media posts painting Warnock as a radical. When asked why Georgians shouldn’t take those comments at face value — specifically some comments critical of police — Warnock did not directly address the issue.

“My opponent is going to work really hard spending millions of dollars of her own money trying to push a narrative about me because she’s clearly decided that she does not have a case to be made for why she should stay in that seat,” Warnock said. “I have worked my whole life to pull people together.”

Warnock continued: “I’ve worked alongside law enforcement officers to do that work. Several years ago I actually brought together the law enforcement officers here in this city. The chief of police. The Black Lives Matter activists. The sitting attorney general. Families, parents, all in my church… We need somebody who knows how to bring people together rather than using these issues as a political point to be made.”

Loeffler responded: “My opponent, radical liberal Raphael Warnock, has called police officers gangsters, thugs, bullies and a threat to our children. When I gave him a chance to apologize in our first debate, he declined.”

3. Loeffler and Warnock agree — Americans should take the coronavirus vaccine

After Vice President-elect Harris and other Democrat Senate candidates cast doubt on the safety of a vaccine approved under Trump earlier this year, both Loeffler and Warnock agreed Sunday that a vaccine approved by health professionals will be safe and that they would encourage people to take it.

“When our health professionals tell us that we have a vaccine that works and is effective and safe, I will take it. I will encourage the folks who listen to me, people who are in my church and in the community to take it,” Warnock said. “But also I will try to work hard as a senator to make sure that communities that are so often marginalized don’t find themselves at the back of the line again.”

Warnock went on to attack Loeffler over her response to the pandemic. Loeffler then launched broadsides against Warnock on the economy, saying “I’ve created jobs, he’s never created a job in his life.”

Bluestein reminded the senator of the question — whether she would take the vaccine and how she would encourage Americans to take it too — and Loeffler responded with a full-throated endorsement of taking a vaccine.

This combination of photos shows Raphael Warnock, left, a Democratic candidate for the U.S. Senate. and Republican U.S. Senate candidate Sen. Kelly Loeffler on Nov. 3, 2020, in Atlanta. The two are in a runoff election for the Senate seat. (AP Photos)

“I was with Vice President Pence on Friday at the CDC. I could not be more proud of what we’ve done this year to deliver relief but also get cures,” Loeffler said. “I’m going to encourage my fellow Georgians to stay safe, to get that vaccine. We have a great plan to prioritize those communities who need it most.”

Abortion, perennially one of the top hot-button issues in American politics, made an appearance Sunday night. Loeffler attacked Warnock as “someone who uses the Bible to justify abortion,” while speaking about the Democrats’ history as a preacher.

Warnock responded by saying that he believes abortion should be a woman’s choice.

“I have a profound reverence for life and an abiding respect for choice. The question is whose decision is it?” Warnock said. “And I happen to think that a patient’s room is too small a place for a woman, her doctor and the U.S. government. I think that’s too many people in the room”

Packing the Supreme Court, which was a major issue the final few weeks of the presidential campaign when Biden refused to say whether he would support it, reared its head again Sunday when Bluestein asked Warnock his position on the issue.

Warnock did not say whether or not he would pack the Supreme Court, explaining that as he talks to Georgians they are more concerned about coronavirus relief and that court-packing is more an issue those inside the Washington beltway are concerned about.

“I’m really not focused on it,” Warnock said. “And I think that too often the politics in Washington has been about the politicians.”

Loeffler, meanwhile, declared flatly that her opponent “would pack the Supreme Court.”

“That’s outrageous,” the senator said. “Justice Ginsburg herself said nine justices is the right number. He would pack the court with radical justices that legislate from the bench to fundamentally override the Constitution and our laws in this country.”

GDOT has two planned resurfacing projects that should get ...
Wednesday, June 9

The Dade County School’s Board or Education have ...
Previous Next