Rep. John Lewis (D-GA), a former leading civil rights activist and symbol of the movement in the House of Representatives during his 33-year tenure, died Friday night.

Lewis, the son of Alabama sharecroppers, was already a national figure when he first entered Congress in 1987.

The former chairman of the Student Nonviolent Coordinating Committee (SNCC) and one of the keynote speakers at the historic March on Washington, Lewis established himself throughout his time on Capitol Hill as a leading advocate for the rights of minorities.

His decades of tireless activism came to a climax when then-Sen. Barack Obama (D-IL) soared to victory in the 2008 presidential election. Lewis was the only person who spoke from the steps of the Lincoln Memorial in the summer of 1963 to witness the election of the nation’s first African-American president.

“When we were organizing voter-registration drives, going on the Freedom Rides, sitting in, coming here to Washington for the first time, getting arrested, going to jail, being beaten, I never thought — I never dreamed — of the possibility that an African American would one day be elected President of the United States,” Lewis wrote shortly before the 2009 inauguration.

Born in Troy, Alabama, Lewis grew up on a farm and attended segregated public schools. As a teenager, he was inspired by the nonviolence of Rosa Parks and Martin Luther King, Jr., quickly launching his career as a civil rights activist. 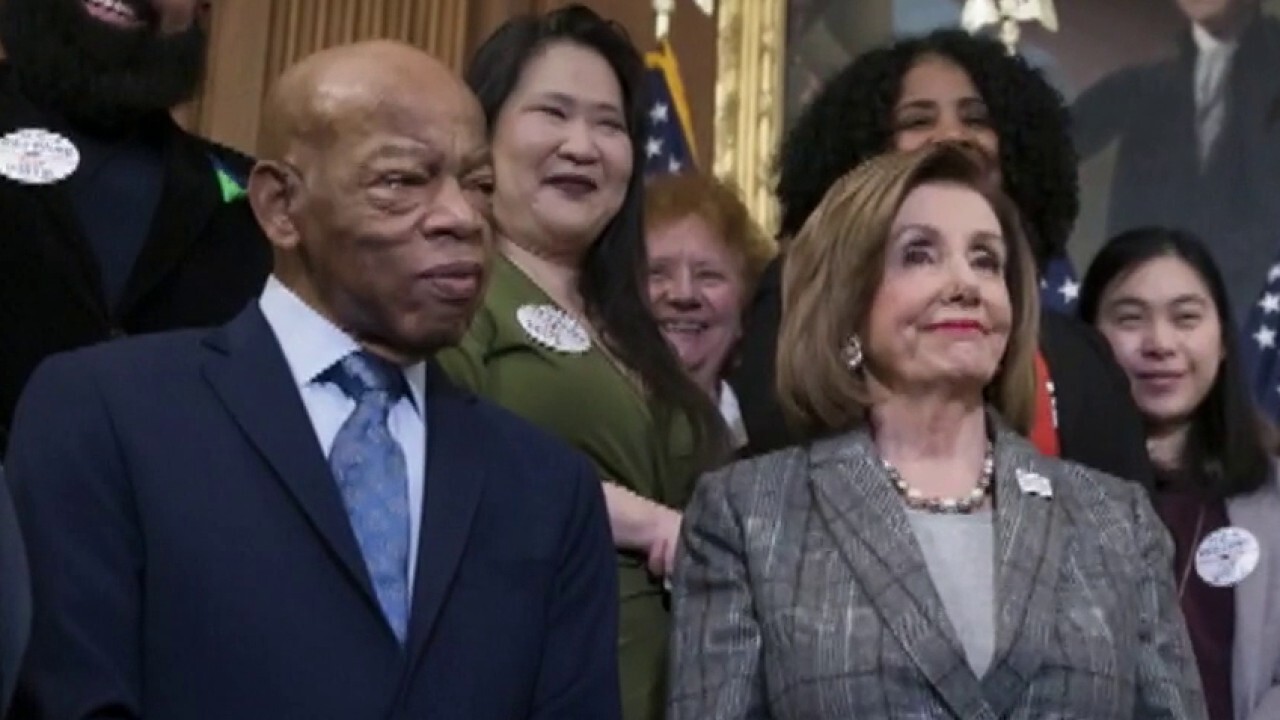 He first worked with the local sit-in movement, and in 1961, he was one of the original 13 activists who participated in the Freedom Rides. They caused a media firestorm by refusing to move from seats reserved for white patrons at interstate bus terminals across the South. However, they met angry mobs and aggressive police officers at every stop, and Lewis was severely beaten multiple times.

During a stop in Anniston, Alabama, Ku Klux Klan members deflated the bus’s tires and set it on fire – and in Montgomery, Alabama, Lewis was hit in the head, causing him to lose consciousness.

“It was very violent. I thought I was going to die,” Lewis told CNN when reflecting upon the Freedom Rides 40 years later.

Lewis was considered one of the most influential leaders of the movement, akin to King, Whitney Young, A. Phillip Randolph, James Farmer and Roy Wilkins.

In this March 17, 1965, file photo, Dr. Martin Luther King Jr., fourth from left, foreground, locks arms with his aides as he leads a march of several thousands to the courthouse in Montgomery, Ala. From left are: an unidentified woman, Rev. Ralph Abernathy, James Foreman, King, Jesse Douglas Sr., and John Lewis.  (AP)

Beaker, initially intended to sharply criticize what he perceived as the Kennedy administration’s slow progress on civil rights. But moments before Lewis gave his speech, other activists forced him to remove some of his most choice words because they feared negative backlash from the administration, which at that point had introduced a civil rights bill. Although many in the movement agreed that the bill was insufficient, they did not want to alienate the government when it was finally starting to be on their side.

Cut from the speech were phrases such as “I want to know, which side is the federal government on?” and “In good conscience, we cannot support wholeheartedly the administration’s civil rights bill, for it is too little and too late.”

Many activists were angered by the censorship, but in the final version, Lewis did say that while the movement supported the administration’s bill, it was with “great reservation.”

Despite the last-minute edits, Lewis gave a stirring speech before the thousands gathered on the National Mall.

“We are tired. We are tired of being beat by policemen. We are tired of seeing our people locked up in jail over and over again, and then you holler ‘Be patient.’ How long can we be patient? We want our freedom and we want it now,” he said.

Less than two years later, on March 7, 1965, Lewis and fellow SNCC activist Hosea Williams led 600 people in a 54-mile march from Selma to the state capitol in Montgomery, Alabama, to demonstrate for voting rights in what was later known as “Bloody Sunday.”

When they started to cross Edmund Pettus Bridge, the protesters were met by state troopers armed with clubs and tear gas who ordered them to turn back. Undeterred, they stopped to pray – and the troopers launched violent attacks.

Hundreds were injured, including Lewis, whose skull was fractured from a trooper’s hit to his head. He managed to escape to a nearby church and spoke at a press conference calling for President Lyndon Johnson to send military reinforcements to Alabama.

In this Tuesday night, Sept. 3, 1986, file photo, John Lewis, front left, and his wife, Lillian, holding hands, lead a march of supporters from his campaign headquarters to an Atlanta hotel for a victory party after he defeated Julian Bond in a runoff election for Georgia’s 5th Congressional District seat in Atlanta. (AP)

Images from the scene played on television screens across the nation, sparking public outrage that eventually led to the final passage of the landmark Voting Rights Act of 1965.

Decades later, Lewis led annual congressional delegations to Selma to commemorate the event and remind members how far they had come – as well as how much farther they had to go.

Lewis even relied on old non-violent, sit-in tactics in the House.

In June 2016, Lewis and Rep. John Larson (D-CT) took seats on the carpeting in front of the dais in the House chamber, refusing to move, to protest the scourge of gun violence in America.

Lewis led the SNCC until 1966, by which point a long-stewing rift between proponents of non-violence and those who preferred more confrontation led to a change in the organization’s leadership. Stokely Carmichael replaced Lewis as chairman, thus changing SNCC’s platform. Lewis then went on to become the director of the Voter Education Project, helping register nearly four million new voters.

In this Wednesday, Oct. 10, 2007, file photo, with the Capitol Dome in the background, U.S. Rep. John Lewis, D-Ga., is seen on Capitol Hill in Washington. Lewis, who carried the struggle against racial discrimination from Southern battlegrounds of the 1960s to the halls of Congress, died Friday, July 17, 2020.  (AP)

In 1977, Lewis launched a failed bid for Congress, losing to future Sen. Wyche Fowler (D-GA). Later that year, President Jimmy Carter appointed him as the director of ACTION, a federal volunteer agency.

Lewis entered elected office for the first time in 1981 as a member of the Atlanta city council. Five years later, he made another try for Congress, eking out a narrow victory against fellow civil rights activist and state senator Julian Bond in the Democratic primary.

Upon his arrival to Capitol Hill, Lewis’s stature within the civil rights movement commanded respect from both sides of the aisle. He eventually rose to the chairmanship on the House Ways and Means Committee’s oversight subpanel, and then-Speaker Tom Foley (D-WA) appointed him the senior chief deputy whip in 1991.

His position on the powerful House Ways and Means Committee, which has jurisdiction over the federal tax code and economic policy, gave him ample opportunity to advocate for the cause he had always championed.

But Lewis thought the 1996 welfare reform shortchanged the poor and minorities. “Where is the sense of decency? What does it profit a great nation to conquer the world, only to lose its soul?” he said.

Lewis also introduced a bill to establish the National Museum of African-American History and Culture, which President George W. Bush signed into law in 2003.

In this Feb. 15, 2011, file photo, President Barack Obama presents a 2010 Presidential Medal of Freedom to U.S. Rep. John Lewis, D-Ga., during a ceremony in the East Room of the White House in Washington.  (AP)

He frequently evoked civil rights rhetoric throughout his time in the House, particularly during the debate on the 2010 health care reform legislation.

“There are those who have told us to wait. They have told us to be patient,” he said in a speech on the House floor. “We cannot wait, we cannot be patient. The American people need health care, and they need it now.”

That debate also brought back memories of the civil rights movement for Lewis when hostile crowds protesting around the Capitol hurled racial epithets at him as he walked past. The next day, on March 21, 2010, he joined a press conference with then-Speaker Nancy Pelosi (D-CA) and Caucus Chairman John Larson (D-CT), who said they would “walk across the bridge” – just as Lewis had done 45 years earlier in Selma.

The three, joined by other members of the Democratic leadership, then walked arm-in-arm across Independence Avenue to the Capitol in full view of the protesters. The final measure passed the House later that day.

Lewis had not always supported Obama, however. The congressman had initially backed then-Sen. Hillary Clinton (D-NY) for president in October 2007. But a few months later, he received strong criticism from the African-American community when he showed reluctance to throw his support behind Obama, even receiving two primary challenges in his district. He later switched his endorsement to Obama in February 2008 and easily fended off his electoral opponents.

As the only original speaker in the March on Washington who would live to see the moment, Lewis was on stage during Obama’s inauguration on January 20, 2009 – five days after what would have been Martin Luther King’s eightieth birthday.

When presenting the medal, the first African-American president of the United States said: “[G]enerations from now, when parents teach their children what is meant by courage, the story of John Lewis will come to mind – an American who knew that change could not wait for some other person or some other time; whose life is a lesson in the fierce urgency of now.”

40 Years Ago Today: John Lennon Ends Retirement And Releases ‘(Just Like) Starting Over’